Men are often seen as more carefree where appearances are concerned, but as studies have proven decisively in recent years, not to mention the number of men’s grooming and personal products on the market, that actually isn’t the case at all.
Male members of society, and not only young men, tend to place more importance on their appearance than they’re usually credited with, which can be positive in that they’re taking care of themselves and want to present an appealing image to the world, but it can also be negative in that their self-esteem can take a beating.
Ask any man what part of their body they dislike the most and the majority of men will reply in a flash – ‘my hair’, ‘my waistline’, or ‘my height’ being some of the most common responses. It’s natural to aspire to greater things in life, but it’s also very important that we’re happy with what we’ve got, or if we aren’t, that the changes we seek to make are realistic and don’t inadvertently cause ourselves harm – whether that’s physical, mental, or emotional harm. 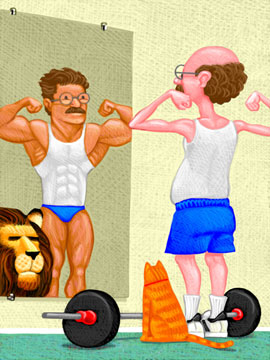 Your body image is the way that you see yourself, so it’s therefore your thoughts and your feelings about how your body looks to yourself and to others. Whilst some men have a positive body image, i.e. they’re happy with the way that they look, other men have a negative body image, which means they’re unhappy with their appearance.
Women are believed to place greater emphasis on body image than men, but men also suffer insecurities about their appearance, such as hair, height and physical strength, the ‘masculine attributes’ linked to the ‘tall, dark and handsome’ legend that dominates the male psyche to this very day.
A study by the Center of Appearance Research at the University of the West of England found 80.7% of men talk about their body negatively compared to 75% of women, and 38% of men would give up a year of their life for the perfect body. Some men even resort to compulsive/obsessive measures to achieve what they perceive to be a more attractive physique, including extreme bouts of exercise and dieting, and there are many more men suffering from bulimia than statistics have shown.
“These findings tell us that men are concerned about body image, just like women. We knew that ‘body talk’ affected women and young people and now we know that it affects men too,” says Dr Philippa Diedrichs, the doctor who led the study.

It’s natural that men should take pride in their appearance, but they must also realise that we can’t all look like Adonis with his chiselled physique and classical good looks. What’s more, not all women want a man who looks that way, and many men may be surprised to learn that many women actually prefer men who aren’t tall or look like they spend all day in the gym, but are simply comfortable with the way they look.

Your self-esteem directly relates to how much you like yourself and what you think of your personal attributes and qualities. People with high self-esteem generally feel positive and confident about themselves, they believe that they have good qualities and strengths that make them valuable to society, and they also tend to be far more sociable. People with low self-esteem tend to lack confidence, they doubt their value and their abilities, and they usually find socialising and trying new things difficult.

Because body image can directly affect your self-esteem for better or worse, it’s very important to be comfortable with the way you look. Sure, there might be things that you’d like to change, but as long as your goals are realistic and they don’t impede your ability to enjoy life – this includes not realising those goals, as can happen to the best of us – that’s fine, we all need things to aspire to in life, so if a more toned physique is something you want and you’re prepared to work hard for it, why not?
However, it’s also important to understand that some things, no matter how hard one tries, are always going to be unachievable, so it’s also important to realise this and focus on the aspects of your appearance that can be improved upon, like your hair.

Hair loss affects a high percentage of men, with some affected more than others. There are a number of reasons why men lose their hair, but the impact upon their self-esteem is generally the same – they tend to feel less attractive, they feel older, they may feel less sexually virile, and some even think their chances of employment are lower than they were before.

Advances in hair transplant technology now mean that most men can regrow their hair and feel more confident about themselves and their capabilities, boosting their self-esteem and helping them to look at life and all the possibilities it presents in a new and exciting light. If you recognise that your hair loss is impacting upon your life in a negative manner, it’s time to do something about it, and the first step to take is to arrange a free consultation with GetHair at our London office in Islington.

Your consultation with one of our knowledgeable patient coordinators is completely free of charge, there are no obligations whatsoever, and you’re sure to be amazed at the phenomenal results that our experienced hair transplant surgeon can deliver. If you recognise that your loss of hair is impacting negatively upon your life, that it’s affecting your self-esteem and your ability to live life to the fullest, arrange a free consultation with GetHair today and we’ll talk you through your options.